"The improvements would provide a connection between the East-West Cycle Superhighway on the north bank of the Thames and the Central London Cycling Grid on Belvedere Road and Royal Street in Lambeth, providing a joined-up cycling network for this part of London."

"Cycle facilities on Westminster Bridge
"Westminster Bridge is a grade two listed structure and a busy bus, cycling and pedestrian route. We would like to know what you think about how cycle facilities should be provided on Westminster Bridge. We are proposing two options:
a. 2.3m wide mandatory cycle lane in both directions
This approach would give cyclists more space to overtake one another. A painted white line would separate cycles and motor vehicles, but there would be no physical segregation. Motor vehicles would be prohibited from entering the cycle lane.
b. 1.8m wide segrgated cycle track in both directions
This approach would provide cyclists with physical separation from motor vehicles using a 0.5m wide traffic island, but may reduce cyclists’ opportunity to overtake one another." 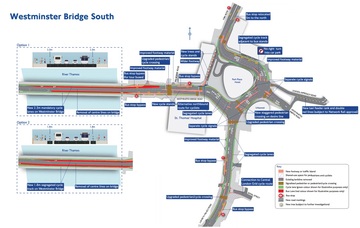