The London Cycling Campaign have reported that cycling is up 38% on the Embankment, and 200% on Lower Thames Street! This is money well spent, they reckon.

Simon Munk has previously written that he is rather keen that no one makes wildly inaccurate claims about any scheme, and I would like to fact-check the LCC's claims here.

That cycling is up 38% on the Embankment is neither here nor there. People for Bikes has reported that protected bike lanes tend to increase ridership on a street by an average of 75% in the first year alone. As they also noted, about three quarters of these 'new' users were already using a bike for that trip — they had simply adjusted their route to take advantage of the improved facility. So a 38% increase on the Embankment equates to very few genuinely new users, and almost zero from the Interested but Concerned demographic. 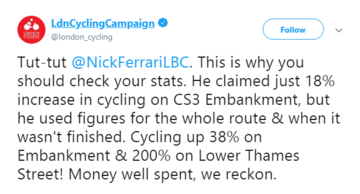