At the end of this blog post, it's reported that the segregated cycle path from Cambridge North station to the north of the Business Park will be closed to cyclists from March 2019 to December 2020 (a period of 21 months), for utility works relating to development on the Cambridge North site. Cyclists are to be diverted to the south side path (along the busway); pedestrian access on the north side will apparently be maintained.

In particular, this appears to prevent cyclist use of the recently opened gate at the south end of the Business Park for the duration of the works (unless perhaps one pushes one's cycle). Getting from or through Cambridge North to the Science Park will be less convenient, too.


Early works have begun on the further development around Cambridge North, where new offices and a hotel will be built. Within the next couple of months, a major cyclist diversion will be put in place which reroutes cyclists accessing the station via the segregated path along Cowley Road. This will be closed to allow utility works from Milton Road down to the station. Cyclists will be redirected along the Busway cycleway from Milton Road. There will continue to be road access for cyclists to the industrial and residential units off Cowley Road (including the Camcycle office), but not beyond this point. Note that there will be a signifidant increase in construction traffic along Cowley Road. 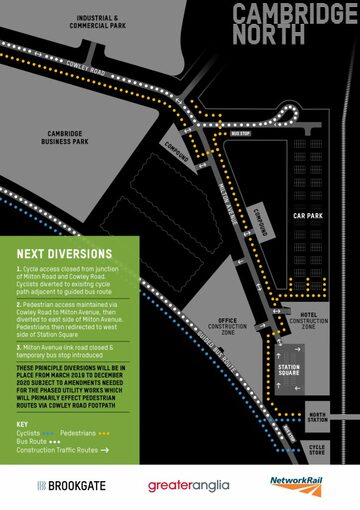