TfL officers told us last November that they have a project to improving conditions for cyclists on Camden Road. This would include "investigating the feasibility of a northbound mandatory cycle lane; a wide bus and cycle lane southbound and the removal of two- lane flares at junctions". They assumed a 12m road width, suggesting 6m for a pair of general traffic lanes together with a 2m cycle lane and 4 m bus +cycle lane.

They are now inviting CCC to a meeting to discuss cycling on the TLRN in Camden, and also take the opportunity to walk along Camden Rd to further discuss the corridor scheme they’re progressing. On further enquiry they said:
"We would prefer to take the opportunity to engage with CCC as an independent stakeholder, separate from LB Camden, in order to fully understand the campaign’s ambitions for the TLRN."

So....
1. Let's clarify what we would want on Camden Road (without taking on TfL's assumption that there must be a bus lane. And being realistic as to what might fit in at a junction. The above photo shows a potential left hook situation.

2. Can I have volunteers to join me on this walk/talk. 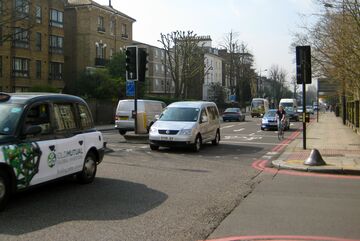