Ever since Tesco opened their new shop on East Road, there has been poor unloading practice.

The company is unloading always from the front of the store with a large lorry which:

- Is stopped in the (advisory) cycle lane.
- The tail of the lorry is opened into the carriageway without a banksman, with the corner of it at the same height as a cyclist having to merge round the lorry - there is real potential for a head injury because of the relative invisibility of this
- Causing traffic to be reduced to one effective lane (or two, just squeezing through, if no large vehicles), causing delays for a half an hour period.

They have stopped using the zig-zag lines.

This photo shows the danger that is created:
http://www.cyclestreets.net/location/68145/ 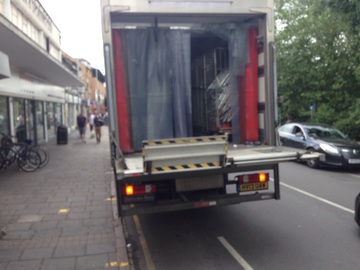