One of the five City Deal 'cross-city improvements' schemes is Ditton Lane.

"National Cycle Network 11 and 52 (NCN 11 & NCN 51) crosses Ditton Lane near Fison Road and then runs parallel to the river Cam and connects the City Centre with East Cambridge. This route is extensively used by cyclists heading to Newmarket Park & Ride and Marshalls. In the future the route is also likely to be used by those travelling to the Wing housing development. This scheme will ensure imrpovements to the busy NCN 11 & NCN 51 and improve the links to the local area, Fen Ditton Primary School and Horningsea." 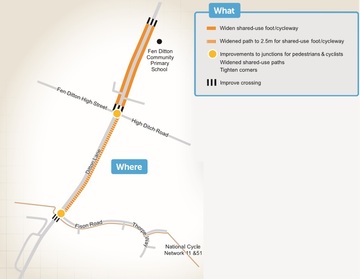