We would like your views on our proposals to make changes to cycling provision on Tanner Street. As part of these changes, a segregated two-way cycle track would run along the eastern side of Tanner Street and join the proposed Cycle Superhighway Route 4 (CS4) on the northern edge of Jamaica Road. Tanner Street forms part of Quietway 14, linking Tower Bridge Road to Canada Water. Quietways are a network of cycle routes throughout London, linking major destinations and are especially helpful for those who wish to use quieter, low traffic routes.

These changes have been designed to make cycling easier, safer and more attractive. We’re also proposing changes for pedestrians, including a new signalised pedestrian crossing on Druid Street and changes to footways. The proposals form part of the Mayor of London’s plan for Healthy Streets - a long-term vision to encourage more Londoners to walk and cycle by making London’s streets healthier, safer and more welcoming. 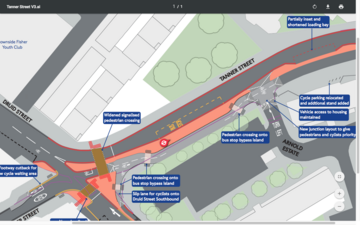