I work near the station and the area out the front of the new building has short term cycle spaces for the shops there. These spaces are specifically for the retail units (ratios of this is in the planning application I understand). so the racks have to be installed and wont be policed by the retail units (such as the ones by Microsoft which are for employees) yet they fill with commuters who should be using the cycle park.

I have been thinking that Cambridge CC needs to agree a system (bye law?) to create short term racks. The colour should be different and signage provided but for racks that need controlling like this it is essential to stop antisocial cyclists piling up bikes.

Of course its difficult to police, and a heavy handed approach should be avoided but I see a growing issue across the city where racks for specific short term purposes are created but then filled with long term cyclists who should accept if they are parked all day that the extra 2 minutes walk for them to a proper cycle park is reasonable to expect. Otherwise this puts people off cycling the short distances as they fear they wont get a rack or will spend a lot of time scrambling for a spot.

Cyclists could be stickered and if caught again then fined. Or clamped to the rack with a fee to unlock (yes I know that sounds like it defeats the object but it should work after a while). 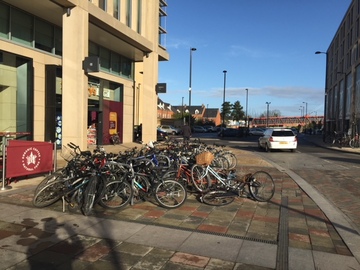