TfL says:
We are seeking your view on our proposals for Nine Elms Lane and Battersea Park Road; developed through dialogue with the Nine Elms Vauxhall Partnership.
We propose to transform the 2.5km stretch of road from the Vauxhall Gyratory, along Nine Elms Lane and Battersea Park Road to Macduff Road, connecting to Cycle Superhighway 8 (CS8). Our proposed changes would act as a backbone to the major developments taking place in the area, improving conditions for pedestrians, cyclists, and bus passengers, as well creating a more pleasant and characterful street environment and a sense of destination to the area.
Our proposals are being funded through contributions from developers administered by London Borough of Wandsworth.
Ahead of these proposals and in response to the ongoing levels of construction in the area, we will implement a small scale, interim scheme during summer 2017 which looks to increase safety in the area and enhance the urban realm. More information on this scheme can be found here.

What are we proposing?
We are proposing a complete redesign of the road layout on Nine Elms Lane and the eastern part of Battersea Park Road to deliver improvements for pedestrians, cyclists and bus users and accommodate future growth of the area. Proposals include:
New, wide footways
23 new and improved signalised crossing points
A new cycle route on the south of the Thames from CS8 at Macduff Road to Vauxhall Gyratory, featuring:
‘Stepped’ cycle tracks in both directions (see below) from Vauxhall Gyratory to the new Battersea Power Station London Underground entrance
Dedicated segregation and allocated time for cyclists at some junctions
Bus stop bypasses provided in some locations
Stepped cycle tracks are vertically separated from the footway and main carriageway.
Increase in bus lanes to provide reliable journey times to bus passengers
Improved junctions by upgrading signals at 5 junctions and providing 3 new signalised junctions
Improvements to the street environment, which would see high quality finishes, repaving and new trees planted where possible
We would ensure all design and construction is closely coordinated with our plans to transform Vauxhall gyratory.

Why are we proposing this?
As part of the Mayor’s Opportunity Area Planning Framework, Vauxhall, Nine Elms and Battersea has been identified as an area for major redevelopment. Nine Elms Lane and the eastern part of Battersea Park Road is a major gateway and transport artery for the area.
Development is well underway and will be continuing in the coming years, which includes over 40 major developments with new residential and office units, two new town centres at Battersea Power Station and Vauxhall and two new London Underground stations on a new Northern Line Extension, at Nine Elms and Battersea. 20,000 new homes are being built, creating 22,000 construction jobs and a further 25,000 new jobs between now and 2027. Significant improvements are also being made to the public realm, which will include a new 11-acre Nine Elms Park linking Battersea Power Station to Vauxhall Cross.
In response to these levels of development and the change in land use, we have been presented with an opportunity to enhance the highway, creating a backbone to the development and a destination where customers are encouraged to walk, cycle and use public transport.
The proposals form part of the Mayor of London’s plan for Healthy Streets – a long-term vision to encourage more Londoners to walk and cycle by making London’s streets healthier, safer and more welcoming. We are proposing substantial improvements for pedestrians, cyclists and bus passengers in the area to help encourage more people to use these healthy and sustainable forms of transport.

Summary of the proposed changes

Cycling facilities
New segregated cycle lanes in both directions along most sections of the route. We would make space for these by reallocating space from general traffic and realigning traffic lanes
Improvements to safety for cyclists provided through early starts at certain junctions, a cycle only stage at certain junctions, bus stop bypasses and two-stage right turn facilities
New signalised junctions at Savona Street and Battersea Park Road, Thessaly Road and Battersea Park Road, and Cringle Street and Nine Elms Lane
Ponton Road would see a redesigned junction providing cyclists travelling westbound with a cycle only green stage at the traffic light. Cyclists travelling eastbound, straight across the junction, continuing on Nine Elms Lane would be provided with a bypass lane
Cycle only stages would be provided at Kirtling Street and Ponton Road.

Journey times for motorists and bus passengers
We have carried out traffic modelling analysis to predict how the proposals might affect journey times through the scheme area. A summary of this analysis is available

Parking and loading
The disabled parking bay outside The Battersea Medical Centre would be extended to 12 metres long to provide 2 parking spaces. It would also be relocated onto the footway
All on-street parking bays would have consistent hours of operating, allowing off peak peaking and/or loading

Deliveries and servicing
We continue to work with businesses and freight operators to minimise the impact of these proposals on their operations. If your home or workplace is on or near the proposed route, please let us know if the proposals could affect your deliveries, collections and servicing. We would encourage you to discuss the proposals with companies undertaking these operations.

Environment
Our proposals aim to improve the quality of life in the area by:
Reducing the dominance of traffic, allowing people to better enjoy the area
Increasing provision for active modes - walking and cycling
Exploring opportunities and working with developers to achieve more greening
Creating a sense of place with the proposed new urban realm high quality finishes which would look to include Sustainable Urban Drainage solutions in our proposals
Although we do not expect an increase to the number of motor vehicles in the area, our proposals may change how traffic moves around some roads, which may result in some associated and localised changes to air quality and noise levels. Environmental surveys and modelling would take place as part of our ongoing evaluation of these proposals.

Equalities
In considering the design of our streets, we closely consider the needs of all users throughout the design process. On significant infrastructure projects, we:
Complete Equality Impact Assessments (EIA) at the outset of the project, to review potential impacts on equality target groups, including disabled people
Carry out public consultations, including targeted engagement with specific users such as (amongst many others): Royal National Institute of Blind People, Guide Dogs for the Blind, Age Concern, Transport for All, and the National Autistic Society
Ensure we comply with established guidance – such as the Design Manual for Roads and Bridges – which includes detailed requirements for disabled people
The EIA for Nine Elms Lane and Battersea Park Road will continue to be developed following the outcome of this public consultation, incorporating feedback received.

Next steps
We will analyse and consider all of the responses received to the consultation, and publish our response later this year. Construction of the scheme would be subject to the outcome of this consultation, and further approvals. Should we decide to go ahead, we would aim to start construction in 2020/2021. 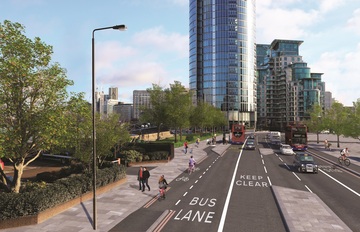