Castle Street cycle lane is a contraflow cycle lane on a one way street in Sheffield. It has been here since March 1997 and allows cyclists enter the city centre from the network of cycle paths on the East, avoiding some big arterial routes with no cycling provision.

For the past 15 years this cycle lane has been plagued by Hackney Carriage drivers parking illegally on this cycle lane, blocking cyclists access and forcing them into oncoming traffic. This has been the case for over a decade. 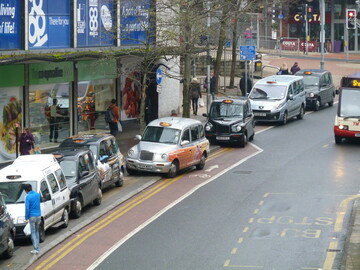